You are not connected. Please login or register
2 posters

I managed the Montwood in El Paso from 1984-1993. When I moved to El Paso, there were quite a few theatres operating, and few remain today. I worked for Movie One Theatres, and we had the Montwood, Palace, and Lomaland (formerly North Loop) Drive in. Commonwealth Theatres had the biggest presence in town with the Pershing, Fox Bassett, Country Club, University Cinema 4, Vista Hills Cinema 4, Towne East Cinema 4, and the Northgate. Commonwealth closed down the Fox, and built a VERY nice 6 plex inside Bassett Center. General Cinema had the Cielo Vista with theatres in the mall and in the parking lot. The Cinema Park Drive In was thriving, as well as the Ascarate DI, and Fiesta DI.

It's been a while since I have been to El Paso, but I've heard the only theatres of these left are the Montwood, and Fiesta Drive In!

Quite a few theatres had already gone by the time I made it to El Paso, and many more have appeared since I left.

Which theatres did you like the best, or go to the most often?
Brenkert 60

The Montwood was my favorite (slightly prejudiced here), but another one I REALLY liked was the Fox Bassett. By the time I made it to El Paso, the once large single auditorium Fox had been split into two auditoriums, but the split was done VERY well. I can only imagine it's grandeur when it opened in the early 60s.

Speaking of split auditoriums, the Northgate (a clone of San Antonio's Wonder Theatre) had the worst split job I ever encountered (only matched by the split Wonder). They were first class theatres as singles, but shoeboxes with horrendous sightlines after the split.

The Montwood Theatre in El Paso is my favorite theatre because I managed it for 10 years, and spent LOTS of time, and made lots of friends there. I took over as manager of the Montwood in 1984. At the time it was a 3 screen theatre owned by Movie One Theatres Of El Paso. Here is a picture of me starting my new job. The CSW Theatres logo on the sign stood for Cinemas Southwest Theatres of Corpus Christi, which built and operated it until they went bankrupt. CSW was probably the worst theatre chain in history. I opened two theatres for CSW in Waco in 1974. They were a nightmare to work for. One of my ushers was a very good artist. I got him to paint over the CSW logo and paint on a Movie One logo. 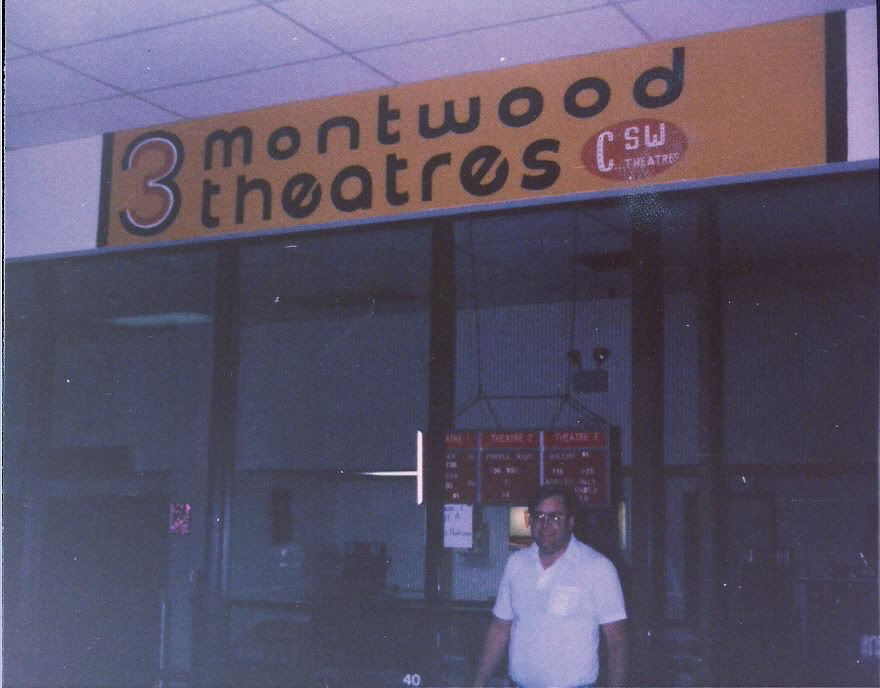 In 1986 we completely remodeled the Montwood, adding four new auditoriums, and remodeling the original three. We doubled the size of the lobby and restrooms by taking space that was once part of the Montwood Mall. We put in a nice island concession stand complete with two Cretors President popcorn machines. We installed some used, but EXCELLENT projection equipment, including the five platters from the San Pedro Drive in, San Antonio! The Ballantyne projectors came from the Texas Stadium Drive In, Dallas. They had very few hours on them. Some wonderful Cinemeccanica Zenith 4000 lamps from a couple of closed General Cinema theatres in Moline Illinois replaced some AWFUL Christie equipment in the original 3 booths.

This is what the front of the theatre looked like after we remodeled it! 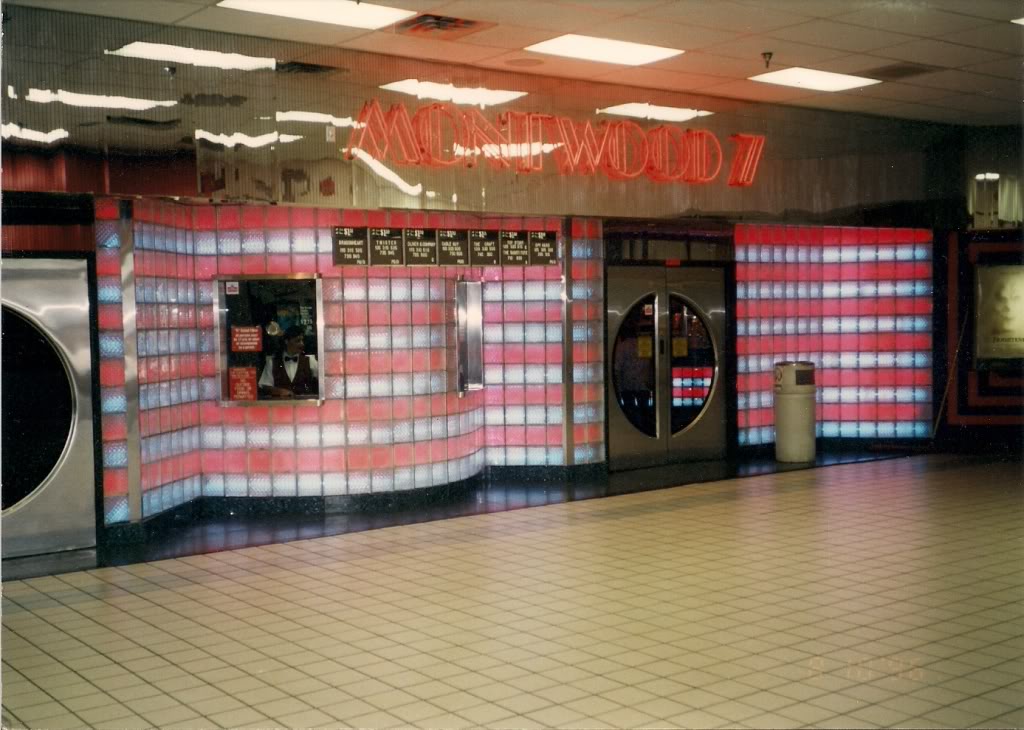 I loved every minute of my years managing the Montwood.
Jayrains

Seeing the pictures of the Montwood bring back memories of my childhood.

The Montwood remodel in the 80's produced one of the coolest theaters in that area. My family moved to the east side of El Paso in 1981 when I was five years old. In the those days money was kind of tight so going to the expensive theater at the Mall (Cielo Vista) was a luxury and reserved for birthdays and such. This meant that the Montwood became my famalies movie home base. This theater and many other fine ones in the area really shaped my love of the movies. I think the Montwood was really my favorite. The outside of the theater, after the remodel, looked really cool and the inside had lasers and smoke machines. Everyone who worked at this theater at the time always seemed to be having a good time and generally looked happy to be working there. This good theater experience might be the reason why I ended up working in movie theaters through high school and college while studying film production. I looked at the website of the current owners of the Montwood. They claim it has been remodeled but the pictures I see look almost exactly like the ones posted here. They might have changed the color scheme but the look remains the same. Guess they didn't want to mess with something that worked.
Brenkert 60

I managed the Montwood from 1984 to 1993. The remodeling was really a time I will remember forever. The crew I had at the time of the remodeling was the best crew I ever had in 30 years in the industry. We had a WONDERFUL time. It was an independently owned theatre, not a cookie cutter. I had my finger on the pulse od El Paso, and gave what was wanted.

Actually my family moved right as I turned sixteen but I worked in theaters in Maryland and Oklahoma. I've been looking at some sites that list theaters and it is kind of sad to see so many have closed down. I think most of the ones I worked at have since closed except one. Also strange seening how the actual theater business has changed over the years. When I first started they still used union projectionist. Did you guys use union projectionist? I loved running the projection booth but having the union guys was nice. It seemed like they could break down and build movies in minutes.
Brenkert 60

I was a union projectionist in San Antonio for 12 years. I quit the union (before they went away) to take over management of the Montwood. There was a union projectionist there that ran five of the nine shifts per week. I was happy to have him.....at first. Unfortunately he did a few "irregular" things to the projection equipment soon after I took over the theatre, and I had to fire him. I didn't hire any more union operators. I taught most of my ushering staff how to operate the equipment, and they did VERY well! I also taught them how to build up and tear down the prints quickly onto the platters, but ONLY AHTER building them up carefully on to big reels remaking all splices, and checking for misframes.

The projectionist union members by and large were their own worst enemies, and they have screwed themselves out of some good jobs.

During my nine year tenure at the Montwood, we only lost three SHOWINGS due to equipment problems. I had virtually every part on hand that normally wore or broke. Excellent maintenance kept our excellent equipment running well!